If, like me, you do not necessarily love pregnancy and birth stories, here is a link to some cute elephants as an apology for even making you read this far ;). Cute elephants - click here. (Edited to correct the link.)

I have never really been one for reading pregnancy and birth stories - even before IF, it just wasn't something I spent a lot of time searching out or found a lot of interest in when others wrote them. I did figure it was a helpful thing to record and realized I was somewhat in the minority as friends (both IF and not) seemed to devour birth stories, and all the TLC shows about birth. I guess this is why even on my darkest IF days, I had the same reaction of 'meh' to pregnancy and birth stories as I did before, because they were not something I felt drawn to.

And yet, here I am, writing my own, now realizing that I was right and that there is something helpful about recording it, remembering it.

I guess it goes without saying that seeing that second line pop up on the stupid pregnancy test I was taking was beyond a shock. In fact, the positive test line showed up faster than the control line and in the nearly 2 minutes I waited for the control line, I was convinced I had a faulty test and was only re-affirmed in my usual position of "I do not POAS." There was a specific reason I was taking a test that day, but that is a story for another time.

And thus began the first of many lessons of just how prideful I was. I didn't realize it at the time in the months before, but I can see now and could see in that moment in a way I can't fully describe, that despite trying to learn that life is a gift and not something we deserve, I was so. far. from. that. Had this pregnancy come within marriage, I would have definitely felt justified that I'd 'followed the rules' and 'done things right' and while I wouldn't have said those words exactly, I certainly would have alluded to it in a not-so-subtle way. I would have proudly proclaimed I was pregnant, finally publicly shared the years of heartache, and then proudly shared that I trusted in God and His timing and didn't use ART or anything like that. I would have allowed myself to believe that I 'deserved' a life entrusted to me. Oh, goodness, my pride is so so big.

Once I was able to function a bit more rationally, I called to have progesterone checked and an early ultrasound was ordered to check that baby was in the right place. My history of blocked tubes necessitated this check, to ensure the pregnancy was not ectopic.

All early blood draws and the ultrasound looked good and after my second ultrasound at 7 weeks, I was completely released to my local ob/gyn without any additional monitoring or concerns.

And thus began nearly 9 months of 'everything looks great' and 'totally  normal.'

It wasn't until nearly the 7 month that I realized, upon a reflection from R that I was quiet and stressed for days before every appointment, that 'everything looks great' and 'totally normal' were foreign words to me. That the last time I had heard 'normal' before this, I had sat in my car and sobbed for 15 minutes because I knew in my heart it wasn't normal and thus began my journey with NaPro and never hearing the word 'normal' again. And so, I couldn't quite believe it was all 'normal'. Once I finally realized this, named it, and chatted with Fr. D about it, I had a bit of a more relaxed time at appointments. I think when we spend years going to appointments and being told of all the things that were found and the new treatments, it is hard to shift to 'normal' and it was just so hard to believe, a sort of post-IF PTSD. Suddenly doctor appointments were something to look forward to and get good news instead of something to dread. It just never seemed quite real. In fact, when at my 34 week appointment my thyroid numbers had dropped, I felt oddly relieved. Like, finally, they found something. But a quick trip to the endocrinologist and a bump up on my Armour and all was better.

The biggest hurdle was an insurance change at about 30 weeks that meant a change in doctors, but fortunately, by moving to a bigger city, the options were good and I was able to transfer to a midwife practice at a large women's hospital. There was some stress around this, but it all worked out way better than I would ever have allowed myself to expect.

And some details about my pregnancy that only I probably care about, but I shall put here just in case:

And that leads us to labor and delivery, which I think I'll make into a separate post, as this seems a little long already.

And if you read this long, here is Sugarbeet on Saturday, turning 3 months old. 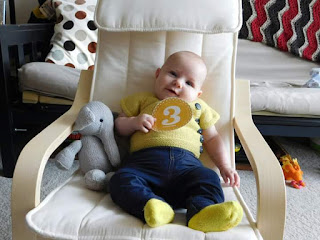