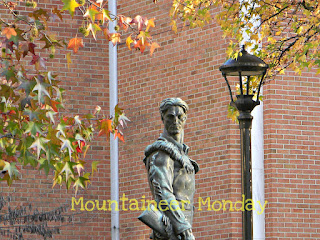 When I brought Mountaineer Monday back last week, I had no idea just how awesome this weekend's game was going to be.

Someone texted me about 3 hours after the game asking: "Have you caught your breath yet?" and "What the heck happened to WVU's defense?" Well - those two questions summed up the game perfectly. It was a good old-fashioned Big XII shoot out - with passing records broken by half-time.

Ge.no Smi.th, WVU's quarterback, threw more touchdowns than interceptions - for those of you who may be reading this that don't follow football, this is A.MA.ZING! He threw the ball 51 times - only 6 of those were not caught and 8, EIGHT, of them were for touchdowns.

Usually I avoid ESPN at all costs after a WVU game, they love to hate us, but I was happy to DVR SportsCenter last night and enjoyed watching it (over and over and over) again this afternoon.

When Coach Holgorsen was asked "How could Geno improve his performance?" (REALLY?!?! who asks that?!) Coach responded by rattling off Geno's stats for the day and then asking "how would you improve upon that?" and when Geno was asked about the Heisman Trophy (awarded to college football's best individual player of the year), he said "I don't really care about the Heisman. We want to win all of our games and we need to do that one step at a time."

Finally, while Big XII play started Saturday, it's only up-hill from here. I heard a snippet of an interview in which it was surmised that WVU has the hardest schedule ever this season. The next 7 weeks have us going to Texas, then Texas Tech, then hosting Kansas State. We get a week off and then host TCU, then head to Oklahoma State, and finally, just before Thanksgiving play host to Oklahoma. I'm exhausted and stressed out just typing that. And frankly, my worries don't end there because we head to Iowa State the day after Thanksgiving before closing out the season at home with Kansas. The last two games are "on paper" wins, but I've seen what "on paper" wins play out like in reality and frankly would rather be facing a tough game in which we are the underdogs to finish our season.

Either way, if the rest of the season is anything like Saturday it will be amazing and horrible and exciting and stress-filled - just the way I like it! I'll leave you with some of my favorite photos from Saturday: