Yep, it's Friday, so it's time for some Flashbacks courtesy of My Tiny Kingdom :).

This week, I'm Flashing back to they day we brought home our first child puppy (okay, so only puppy right now, but I know they'll be more).

The Man and I had been married for almost a month and he had been hinting about wanting a dog since before the vows. I was up for it. A puppy sounded like fun. I might even lose a few pounds walking it. BUT, I was very concerned about my sleep schedule. I need my sleep. I don't even like to get up in the middle of the night to take myself to the bathroom, let alone a dog. So, I agreed to a dog if the man agreed to waking up with it at night. But it would be his puppy.

In the man's hints of wanting a dog, were also hints of a specific breed. A Chinese Shar-Pei. A wrinkly, medium-sized dog. A dog with a BIG price tag if it's a pure bred.

So through my 'sures' and my 'no problems, we'll get a dog', and my 'promise you'll get up at night with its', I was thinking "there's no way we'll be getting a dog anytime soon because it will be too expensive."

In the meantime, I started a subscription to our local newspaper. You know, newly married, living in a new town, put down roots, get to know the community, etc., etc. One day, scanning the classifieds, I see under Pets for Sale an ad for Shar-Pei-mix puppies, for $50!! In my disbelief, I call the number listed and inquire:

(in my head I picture a wrinkly little dog with spots) 'What do they look like?'

'How many are there?'

'Great, we'll be up tomorrow afternoon.'

So, the next day, The Man and I head out to go pick up the man's puppy - a male! We arrive at the Dairy Farm and are told there are only 2 left. 1 male. 1 female. The man points out the father (a brown Shar Pei) and the mother (a Dalmatian sitting off in the distance in the shade) and then leads us over to the puppies.

There they were. One brown. One black. One male. One female. Both with BIG brown eyes. I scoop down and pick up the little black one. It was fuzzy and oh so cute. As I scoop down, the man has the sense to ask "Which one is the male?"

"The one there." Pointing to the one still on the ground. I was holding the female.

"But, I want this one." I say, as I feel my shirt get warm and wet. This cute little puppy just peed all over me.

So, the man agrees. We pay our $50 and head to PetsMart to get all of the necessary items for a new puppy. A crate. Food. Food bowl. Water bowl. Leash. Collar. Toys. Treats.

We head home and introduce our new little, furry family member to our two cats. Seriously, the looks on their faces was as if to say "I did NOT agree to this, did you???" But they quickly realized that this little thing was here to stay and pretty much moved on...although, to this day, if Kali would just spontaneously combust I think it would make Max's day!

Anyway, our little puppy took a while to get used to her new surroundings and eventually came out of her new crate to get to know us. That night, we headed to bed and put Kali in her crate in the kitchen. 2 hours later - whining. The man? He doesn't even stir. I get up, take the new puppy outside. Back to bed. 2 hours later - more whining. The man? Again, doesn't even stir. This continues all night.

Day 2: The man teaches the new puppy about toys, treats, food, and walks (tries to anyway, she's not sure what to do on a leash just yet). He's so smitten with her and her with him...it's just so sweet.

Night 2: Repeat Night 1 - only it's every hour instead of every 2 hours that she whines. Remember what I said about sleep? I'm just about ready to take this cute little puppy back.

Day 3: More fun with the puppy - NO accidents in the house. Really, she is very cute.

Night 3: I need to sleep. So, I move the crate from the kitchen to the bedroom thinking the man might hear the whines and get up with her.

Morning 3: Huh? It's morning? I slept all night? Oh no, did the puppy die???? (Seriously, I thought she'd died in her sleep.) I roll over to look in the crate, and there 2 big, brown eyes look up at me. I get up, we go outside. She potties - LOTS. That sweet, little, 8 week old puppy held it ALL night. Not a peep.

From that moment on, she's slept beside my side of the bed. She's slept all night every night since, short of an unfortunate incident involving a moose with rope arms and legs being eaten....

I took her everywhere with me the next few weeks. Enrolled her in puppy class when I realized my puppy parenting skills were not so good.

And when asked whose puppy she is? The Man replies. "It's Rebecca's. She stole my dog." With a smile of course.

Here's one of the first pictures we ever took of her and some favorites too: 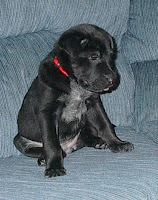 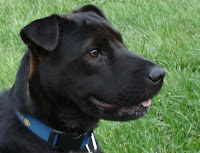 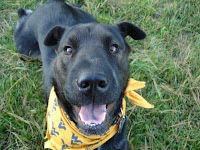